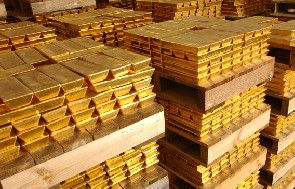 Gold Coast Refinery Limited (GCRL) says its US$110million gold refinery facility is about 95 per cent complete as it is expected to provide direct jobs for over 300 people and 1,000 indirectly.

A modern and well-equipped gold refinery, located at the Kotoka International Airport (KIA), when fully operational will have a daily production capacity of 600 kgs per shift of eight hours.

The refinery will have the capacity to process raw materials into top quality branded precious minerals/gold for the African region.

The refinery includes electrolytic and chemicals and has an induction heating generator, with a special ventilation system to take care of the heat, a laboratory and two vaults each with a capacity of 90 tonnes.

The main investors of the refinery are Banking and Financial Services (BAFIS) sa and Euroget Group of Investors and local shareholders.

Engineers of the refinery, Mr. Mohamed Salama and Shady Sayed conducting a team round the two production lines including the chemical and electrolytic which have the capacity for the 99.999 and the 99.995 respectively, explained that GCRL had the capacity to produce 180,000 tonnes of gold per year.

The engineers said the catchment areas of the refinery would not only be within Ghana but other countries such as Burkina Faso, Togo, Mali, Senegal, Benin, Liberia and Sierra leone.

The company would be sourcing gold in the country from the small and medium-scale producers which would be grouped into cooperatives to improve on their management skills, as well as productivity.

They said the investment would also curb illegal mining activities and ensure that monies which should have accrued to the state, which hitherto were channelled elsewhere, would benefit the country.

“The Refinery will operate within the framework of good delivery international rules for gold and precious metals specifications.

“When the gold is refined here, value is added, which in the long run adds value to the product to make it sell at competitive prices. This will further help create jobs directly and indirectly through support services.

“When the refinery begins production, it will have a multiplier effect by providing the jewellery industry with readily available refined gold, as well as precious metals through the refining process,” the engineers said.

“Owners have made such huge investment in the country because of the peaceful democratic ambience, conducive atmosphere and the peaceful nature of the people.

“The refinery takes into consideration the importance of the environment, makes use of every raw material and recycles the very last material to avoid wastage. It will operate under very friendly, safe and healthy conditions,” they remarked.

The refinery started in 2010 with the initial project preparation including feasibility studies. The actual construction work began in 2013.